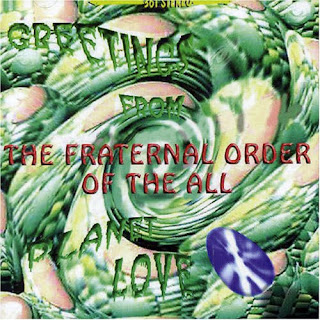 The Fraternal Order Of The All “Greetings
From Planet Love” (J-Bird Records, 1997)
Best remembered for late seventies hit
singles like “Lonely Boy” and “Thank You For Being A Friend” as well as session
work with a handful of notable performers, namely Linda Ronstadt, Andrew Gold
is actually the face behind The Fraternal Order Of All. Graham Gouldman, whose
stunning resume includes penning tunes for the Hollies, the Yardbirds and
Herman’s Hermits, not to mention membership in 10cc, also contributed a couple
of songs to “Greetings From Planet Love.” Although the album was intended to be
a tongue-in-cheek affair, it is so great that it’s too bad Andrew didn’t pursue
such psychedelic fantasies. Claming to be recorded between August 1967 and
August 1968, “Greetings From Planet Love” weighs in as a flawless reflection of
the flower power era, right down to the trippy sound effects to the weird,
wiggy and whimsical lyrical content.
Robbing every trick from the freak machine
imaginable, but doing so with a grin as wide as the Cheshire Cat, The Fraternal
Order Of The All channels the soul of the paisley-poised Beatles on the
irresistibly hooky “Rainbow People” with shameless verve, while both “Love
Tonight” and “Tuba Rye And Will’s Son/Balloon In The Sky,” with their pastoral
textures, goose-pimply harmonies and complex arrangements say hello to the
Beach Boys. Slathered with reedy keyboard fills, a cotton candy and ferris
wheel ambience worthy of the Strawberry Alarm Clock pervades the cheesy
instrumental doodles of “Swirl,” and the chugging “Freelove Baby” blends acid-laced
raga rock riffs with funky rhythms. Drenched to the bone with jangly licks, the
gorgeously melodic “Space And Time” does the Byrds better than the Byrds
themselves, which is indeed an accomplishment considering how utterly
remarkable the Byrds are.
Assembled of angelic choruses and a
production so sparkling that it is blinding, “Time Is Standing Still” is a
spellbinding slice of pure pop magic, and the eerie expressions of “Ride The
Snake” pays obvious lip service to the Doors. Croaking vocals, clearly modeled
after those of Bob Dylan, cap the
sarcastic “Mr. Plastic Business Man,” where the rousing “Tomorrow Drop
Dead” is more or less the cousin of “Tomorrow Never Knows,” as it squeaks and
squeals with backwards guitars. Created strictly for fun, “Greetings From
Planet Love” may be silly, but the quality of the material is excellent and the
songs are played with an earnest feel and understanding of the music The
Fraternal Order Of The All so accurately imitates. Had the album been released
at the height of the psychedelic craze, there’s no doubt it would have reaped
praise. In June of 2011 Andrew Gold departed the earthly realm, but you bet
your bippy he’s now in rock and roll heaven, hopefully jamming good to a
day-glo beat!
Review made by Beverly Paterson/2013
© Copyright
http://psychedelicbaby.blogspot.com/2013
Beverly PatersonReviewsThe Fraternal Order of the All